Editor's note: This story is being highlighted in ASU Now's year in review. To read more top stories from 2017, click here.

At a university that prides itself on inclusiveness and diversity, Arizona State University got a surprising wakeup call when it recently met with more than 1,100 Native American students about their college experience.

Many of them said they felt lonely, invisible, disconnected from other indigenous students, and didn’t know how to navigate ASU’s sprawling campus, or how to access resources available to them.

“In many ways, I think ASU is doing lots of things right regarding our work with Native students,” said Bryan McKinley Jones Brayboy, President’s Professor, director of the Center for Indian Education and ASU’s special adviser to the president on American Indian Affairs. “In our conversations, it became evident that we — collectively — need to do a better job of creating a welcoming environment for Native students. We can — and will — do better in the future.”

The initial effort, a first-of-its-kind magazine geared specifically for Native American students written by an all indigenous staff, will find its way into the hands of ASU’s native student population in two weeks, perfectly timed for Native American Heritage Month, which starts Nov. 1.

It’s just one of several efforts ASU will launch in the upcoming year, efforts aimed at easing the burdens of Native American students, building connections and community, breaking down stereotypes and providing a new path forward.

“We move at a fast pace, and sometimes we miss things that help students feel like they belong at ASU,” Brayboy said. "That is what this magazine, and our other efforts are trying to convey.”

It’s not uncommon for freshmen to feel lost and lonely when they come to college, but for indigenous students, they face specific challenges most others do not.

It can be tough living away from their home communities for the first time. They’re underrepresented and surrounded by people who aren’t familiar with their traditions, culture or history.

The same holds true for “urban Indians,” an increasing population of Native people who live in cities, who often report feeling unseen or stereotyped.

That's why ASU has made it a priority to improve their college career through a suite of new initiatives that addresses how higher education works, how to engage other Native people on campus, how to navigate academic support services, how to get the most out of ASU, and how to build toward a meaningful future to serve their tribal communities. 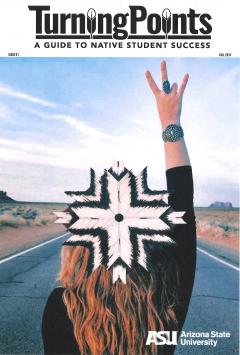 ASU junior Brian Skeet said it was a rough transition going from a high school graduating class of 20 people to a university that counts more than 70,000 students on its campuses.

“I was definitely overwhelmed and felt a real disconnection when I came here,” said Skeet, a Navajo who hails from Tuba City, Arizona. “I thought ASU was a cold place and was not conscious of Native students.”

That all changed about a year ago when Skeet joined the staff of "Turning Points," a new magazine and guide to Native student success.

Skeet said once he started compiling information for the first publication, he was surprised by how many resources are available to Native students. He said after a while he reversed his decision about ASU.

“It was such an eye-opener for me that ASU had all of these wonderful programs in place,” Skeet said.

Brayboy said "Turning Points" not only contains useful information, but it is intended to assist Native scholars in recognizing the many things ASU does for its student body in supporting their success.

“Sometimes those resources are invisible; we want to make them visible,” Brayboy said.

The magazine will be published twice a year with a circulation of 3,500 copies, which will be mailed to prospective college students and distributed to approximately 2,800 Native students on four of ASU's campuses.

It’s just one of many ways for Native students to connect and build community, said editor Amanda Tachine.

“Connection is a worldview in how Natives are brought up, and leaving the reservation in a way is loss of self,” said Tachine, a Navajo post-doctoral scholar who works in the Center for Indian Education, where the magazine is headquartered.

“I hope that a student can pick up this magazine and it could spark their hope and know that they belong here, and continue their journey through college.”

Efforts to raise college enrollment among underrepresented groups are central to ASU’s goal of increasing the number of college graduates in Arizona.

ASU has also sought to increase the number of American Indians on campus through specialized programs, including the SPIRIT orientation program, which helps Native students adjust to college life over a two-week period; INSPIRE, a one-week youth camp at ASU’s Polytechnic campus; and RECHARGE, which started in 2012 with 90 students.

Through these efforts, ASU is raising awareness of its indigenous roots to all students, not just Native Americans.

Starting this semester, the School of Social Transformation instituted a lesson titled “Leveraging Our Place: Native Nations and ASU” in its SST 194 courses, also known as ASU 101.

“The lesson asks freshmen to share their feelings or experiences of connection to place, belonging and identity,” said K. Tsianina Lomawaima, a professor with ASU’s School of Social Transformation who is working with Tachine on the pilot lesson plan.

The lesson will include a video produced by ASU Now featuring President Michael M. Crow, Brayboy and several Native American students discussing the fact that Arizona State University, Arizona and the United States are built on the ancestral homelands of Native peoples.

ASU 101 courses are required for all freshmen, and instructors have the opportunity to select lessons from an array of topics. “Leveraging Our Place” will introduce ASU students to a sense of place and encourage them to consider the question: What does it mean to live on Indian land? 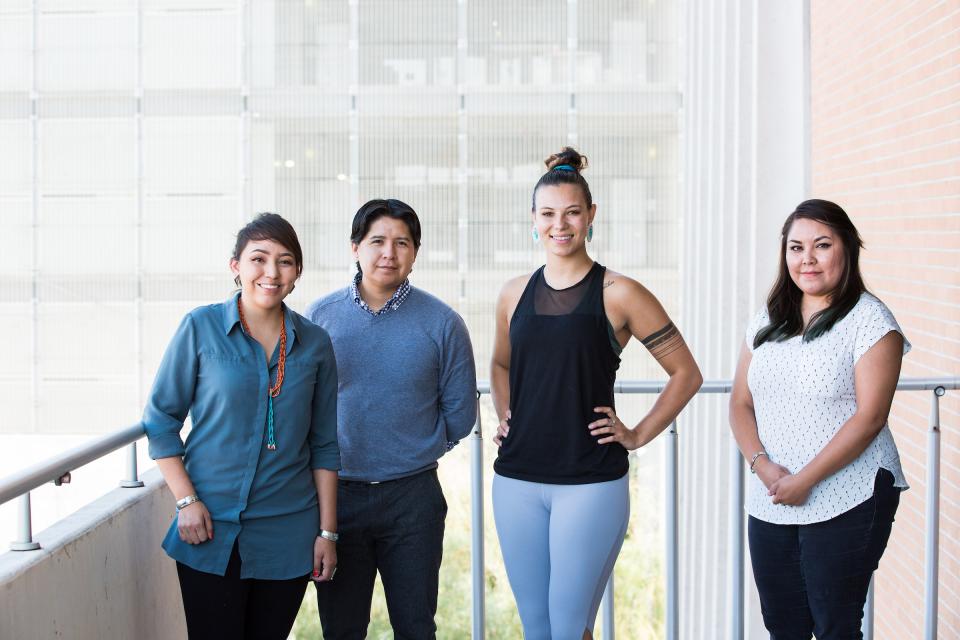 Research shows that Native American students make up less than 1 percent of all college students in the U.S., and only about 13 percent of all Natives have a college degree.

That gnawing statistic was the inspiration for "Greater Than 1," a podcast that will be launched this spring to provide connections, visibility, broad-based support and awareness facing Native college students today.

Creating awareness is Jameson Lopez’s mission, who along with Tachine and journalism major Taylor Notah, will co-produce the show.

“Native students are doing remarkable work for their communities, and their stories are not being told," said Lopez, an education and policy major in the Mary Lou Fulton Teachers College and Quechan tribe member from Fort Yuma, California.

He said the purpose of the podcast is to have interviews with successful American Indian college students and graduates to offer words of support to those who are in college and those contemplating higher education.

The podcast can be up to an hour long and will be widely distributed through iTunes, SoundCloud, RSS feeds and other digital platforms, Lopez said.

Tachine said through Turning Points, ASU 101, and Greater than 1, the university is acknowledging that Native college students matter and underscore that ASU is on the ancestral homeland of Native peoples.

"Fundamentally, these are central to cultivating a place where students can thrive," Tachine said. "We are grateful that ASU is valuing this important work."

Brayboy said other Native initiatives are currently being developed by ASU and will be unveiled by the end of the year.

“Our message to all our students, including American Indian students, is ‘You belong!’" he said.

Here's a few of the events happening this month. Find more at the Student and Cultural Engagement site and ASU Events.