A woman who overcame poverty and discrimination to reach prominence in the U.S. Army challenged students at Arizona State University to help their own communities.

Consuelo Castillo Kickbusch, who grew up in a poor border town in Texas and went on to become the highest ranking Latina in the combat support field of the Army, said that as she began to succeed, she always found a reason to not go back and help her village.

“I always thought of my village as an afterthought: ‘When I finish my studies,’ ‘When I help my parents.’ I always put a priority list before my community,” she said during a talk on Wednesday titled, “Living a Legacy,” sponsored by the First-Year Success Center at ASU.

But after a 22-year career in the military, just as she was offered the position of battalion commander, she retired and decided to give back.

“Now my greatest moments are to sit in the migrant camps and eat tamales with the most neglected, underserved communities in our nation,” said Castillo Kickbusch, who created a company called Educational Achievement Services that runs leadership programs for students. 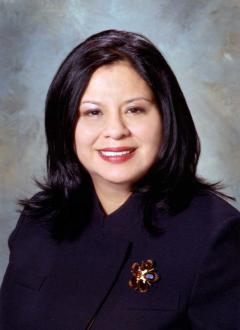 She struggled in school because she didn’t know English, and she began fighting. A teacher tried to Anglicize her first name, telling her she would be called “Connie.”

“I didn’t know that my language would be the first demon I had to conquer, and that not speaking English would put me in a dark world when I went to school,” she said. “I loved school but I didn’t know it didn’t love me back.”

Once, in high school, a teacher broke up a fight and asked her, “Why do you do this? You’re brilliant!” He convinced her that she was bright enough to go to college, but she would need to improve her English.

“So I started to study 12 hours a day,” she said, reading by oil lamp because her family couldn’t afford electricity. Her parents worried that her excessive reading would damage her brain.

She praised the First-Year Success Center, which offers peer coaching to freshmen, many of whom are the first in their families to go to college, and Castillo Kickbusch said that it only takes one person to make the difference in a young student’s life.

“You’re the silent heroes who listen intuitively and with dignity to every student who has a need or a question or feels some pain,” she said.

She became the first person in her village to graduate from high school and enrolled at Hardin Simmons College in Texas, where she joined the ROTC.

“The voices in the background started to mess with me: ‘You don’t have what it takes,’" she said.

A sergeant took her on a seven-mile run and yelled at her, “Give up now!” But she finished. Then she had to go on a 20-mile march with a 35-pound pack. And she did.

“That night that sergeant walked into my dorm room and saluted me and said, ‘Lt. Castillo, tomorrow you will make history as the first woman commissioned in ROTC in Texas.”

Castillo Kickbusch told the students: “Even when you doubt yourself, stretch a little more and you’ll surprise yourself.”

When she got her first paycheck, she sent money home to her parents.

“My mother gets the money order and sees it’s $700. She said, ‘Consuelo’s selling drugs!’"

She flourished in the Army, earning a master’s degree in cybernetics at San Jose State University. One day, her mother came to California to visit her and told her she needed to give back to her community. Two weeks later, her mother died. When Castillo Kickbusch got the call to be a commander, she thought of what her mother asked.

“So there it was, stewing in my unconsciousness, aching for what I had promised,” she said.

So she turned the opportunity down and started her company in 1996. Now she travels around the country, speaking about education and bringing her programs to poor communities.

“Education is the most concrete form of democracy,” she said. “It is the game changer.”

ASU student Lincoln Augustine, who is from Haiti, said he struggled to learn English after immigrating and asked her how she did it. She said that she sat in the front of the class and asked her professors for help.

“And time management: I gave up all the things young people could do, but it was my investment not just in me but in my community,” she said.

“Haiti will always be in you. Some day, go back and free Haiti.”

Top photo: Consuelo Castillo Kickbusch delivers her talk, "Living a Legacy," at the Student Pavilion on the Tempe campus on March 20. Photo by Katie Collins