First-generation students start college as trailblazers in their families, and while that can present challenges, it’s also a source of strength.

Nancy Gonzales, dean of natural sciences in The College of Liberal Arts and Sciences at Arizona State University, found her parents’ lack of expectations to be freeing.

“In grad school, in some ways I was protected,” she said.

“Others felt pressure to live up to high expectations from their families, but I felt like I was there because I wanted to be.

“It allowed me to chart my own direction as a scholar.”

Gonzales was a keynote speaker at the 2020 First-Gen Zone virtual conference, held Nov. 5. This was the second conference for faculty and staff to learn ways to support first-generation college-goers, which represent about 35% of ASU’s undergraduate population, according to Kevin Correa, director of the First-Year Success Center. 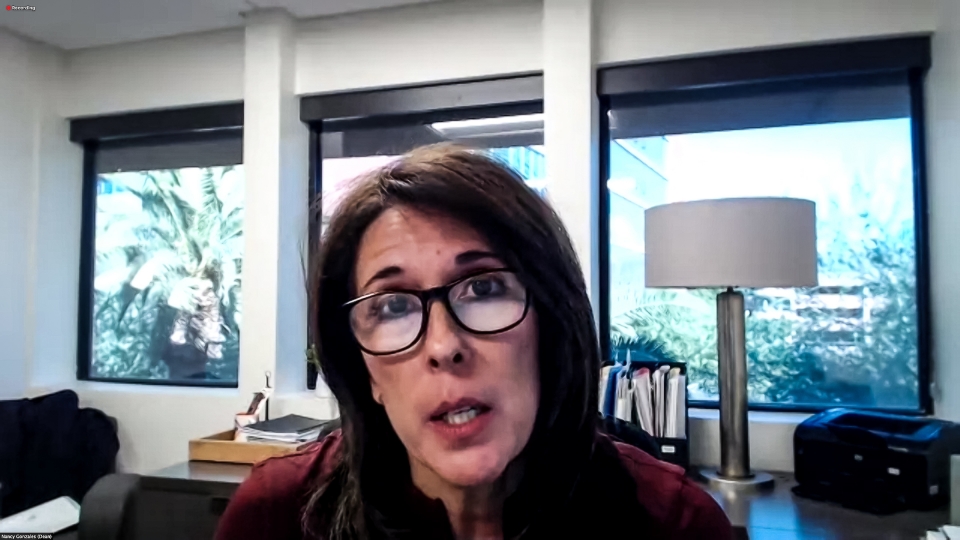 Nancy Gonzales, dean of natural sciences at ASU, was a keynote speaker at the First-Gen Zone virtual conference on Thursday. She described her experiences as a first-generation undergraduate at ASU. Screen grab by Charlie Leight/ASU Now

Gonzales, Foundation Professor of psychology, has devoted her career to researching family resilience and has found that sustaining family and cultural connections is vital for students’ perseverance and mental and physical health.

“We need to make sure that when they come to campus, they are able to connect with others like them in culturally meaningful ways, and we need to give them space to do that and give them groups to do that,” she said.

Gonzales said that faculty must be mindful of the burdens on students who are expected to work to help support their families.

“In science, students sign up for labs and it’s often really long hours of work. That’s part of the expectation,” she said.

“We need to make it possible for them to do it on their terms and be flexible about expectations.”

Shundene Key, a first-year doctoral student in biochemistry, spoke on a panel of first-generation graduate students and described why she chose ASU.

“I felt like with those two combined, I would have a more positive experience here at ASU.”

Kiana Maria Sears, assistant director of faith-based outreach and community partnerships, talked about the Black and African American first-generation experience. She is an ASU alumna and parent of an ASU student.

“Safe spaces is one of the things that matters most and is one of the most difficult and challenging things to tackle,” she said. “I know what it’s like to be on campus, and, in my generation, go a whole week without seeing someone who looks like you,” she said. “It’s good to not only see that person but also to connect and feel that all these spaces are our spaces.”

In her outreach, Sears has found that financial literacy is a critical issue. Many Black families are middle class, above the poverty line, and don’t have access to the same financial aid information as low-income families.

Nationwide, about 85% of Black bachelor’s degree holders have student debt averaging more than $36,000 – the highest of any race or ethnicity, she said.

Black families are less likely to reach out for help in untangling financial aid because typically there is no one in the institution who looks like them.

“This is basically the student putting on a backpack loaded with bricks,” she said.

The conference covered several programs that target specific populations of first-generation students at ASU, including:

Game Changers: This initiative within the First-Year Success Center has a wide range of digital offerings, including peer coaching, networking on Slack, events and student videos.

TRIO Student Support Services: This is for first-generation students who are either low-income or have a disability, and offers tutoring, community service opportunities, workshops, cultural experiences such as shows at Gammage Auditorium, and a program that loans laptops and cameras.

Engineering Futures: The National Science Foundation and private donations fund this program that provides workshops and seminars to build student confidence. In 2019, students attended a weeklong boot camp to hone their skills and develop an entrepreneurship mentality.

Several of the speakers discussed “imposter syndrome” — when people feel that they don’t belong in a space.

Sears said that for Black and African American students, imposter syndrome can be a “double bind.”

“It’s not just the inside voice but what’s actually being said by people outside,” she said.

Keynote speaker Jaime Casap was until recently the “chief education evangelist for Google” and now works on projects involving equity in higher education. He was a first-generation student.

“As a 52-year-old professional ex-Googler, I still feel imposter syndrome. It’s one of those things that exists.

“But these skills will give you a competitive advantage.”

The graduate students on the panel said that meeting the right people made all the difference.

“I didn’t just force myself into these places,” said Esteban Medrano, who is in the last semester of his master’s degree in health care delivery.

Medrano is in the Deferred Action for Childhood Arrivals program, and had to overcome many obstacles, including being blocked from any federal financial aid.

“Thanks to ASU, you can connect to people who can find resources and opportunities. They all want you to continue pursuing your education.”

Top image: Jaime Casap, until recently the “chief education evangelist for Google," was a keynote speaker at the 2020 First-Gen Zone virtual conference on Nov. 5. Screen grab by Charlie Leight/ASU Now