Missy Farr-Kaye has overcome tremendous obstacles on her way to becoming a Sun Devil legend, and her key to that is to always move forward.

“I think the worst place to stay is in the past. That’s gone. That’s behind you,” she said.

The coach of the national-championship women’s golf team at Arizona State University shared her strategies for resilience in a talk titled “Glory and Grit” on Wednesday. She spoke to students and peer coaches in the First-Year Success Center, a program that helps freshmen, sophomores and transfer students build skills to flourish at ASU.

Farr-Kaye is in her third season as head coach. She won the national championship three times as part of ASU — as a player in 1990, as an assistant coach in 2009, and as head coach last year.

But her journey was filled with ordeals — a story she shared during her talk, which was part of a First-Year Success Center series on resilience.

“My journey has not been simple or easy or uncomplicated,” she said. “Success is not a straight line. I am the epitome of the squiggly line.”

Farr-Kaye grew up 15 minutes away from the ASU campus, enthralled with her sister, Heather, who was two-and-a-half years older.

“She blazed the trail for me, and I was happy with that,” she said.

They both started playing golf as girls, then went to Xavier College Prep in Phoenix and then to ASU. Heather Farr went on to success on the LPGA tour.

During her senior year, Farr-Kaye was playing in Asia when she learned that her sister was diagnosed with breast cancer.

“Life was truly never the same again,” she said. “No surprise, my golf was not great.”

Still, in the spring of 1990, Farr-Kaye’s senior year, the team won its first national championship. She graduated and turned pro.

After recovering, Heather Farr then learned her cancer had spread, and she died in 1993 at age 28. 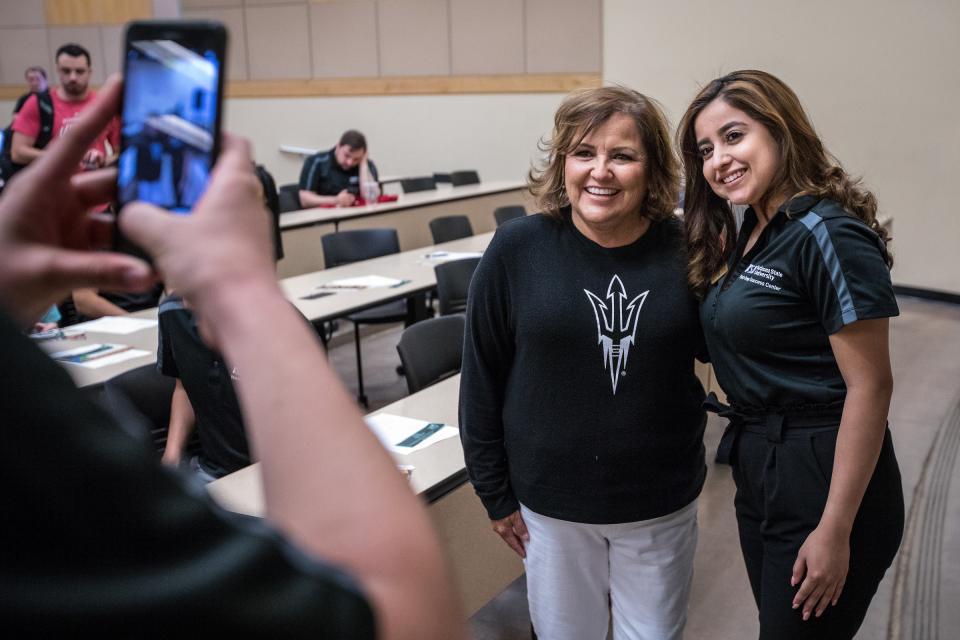 “I had to figure out how to move on with my life,” Farr-Kaye said. “This was not how it was supposed to go. We were supposed to be a sister duo on the LPGA.”

She found solace on the golf course, and she married and had two sons. And five years later, she was diagnosed with breast cancer.

“I looked back to Heather and how she handled it with grace and dignity and passion and fierceness at how she would fight it,” she said. “I had a few days of my pity party, and then I said I would move forward.”

Farr-Kaye had surgery but didn’t have to have chemotherapy. She recovered and then got what she described as the chance of a lifetime — the offer to be an assistant coach of the Sun Devils’ women’s golf team.

“I thought I would be able to have an impact on these young women and continue the history and tradition,” she said. “As much as I felt I was meant to be a mom, I was also meant to be a coach.”

She had another son, and then in 2008, she was diagnosed with breast cancer again.

“I have three kids to manage, and I was going through a divorce at the time. I’m upset and I’m angry. I lost all my hair,” she said.

“How would Heather walk me through this? We just keep going.”

And that season, while she struggled with chemotherapy and radiation, the team won the national championship again.

“My hair was very short and I was a little bit tired, but it was a wonderful experience,” said Farr-Kaye, who worked straight through the season.

A few years later, recovered again and at peace with her job as an assistant coach, the job of head coach opened, and she knew she had to pursue it. She was named to the position in 2015.

“I learned every day. I sought out all of my mentors for sage advice. I read books on leadership. I followed people who inspired me on Twitter,” she said.

“I decided to believe in myself even when I didn’t necessarily believe. I made plenty of mistakes, but I learned from those mistakes and I moved on.”

And two years later, in May 2017, she was again holding the national championship trophy.

“Life is not always fair. I tell that to my girls all the time. But how you pick yourself up again is what’s important — not the things that happen to you.”

Among the advice that Farr-Kaye shared on resilience and how she coaches her players:

• When she became an assistant coach, she realized it was what she was meant to do. “If you have that ‘aha moment,’ keep going. That’s when you’ll realize how much of an impact you’ll have.”

• Ask for help. “You can’t do it alone, and you can’t do it without support,” she said. She relied on help from the team’s mental coach during her chemotherapy. “It’s a wonderful thing to talk to somebody and work through what you’re going through.”

• Be careful in goal setting. “If you set a big goal, it can be overwhelming. Sometimes you need to break it down one day at a time, especially if you’re struggling.”

• Control what you can control. “We have no control — I preach that to my team,” she said. “So what are things we can control? They have a new one — no complaining. And our energy at practice today was so positive.”

After the talk, Farr-Kaye attended the Founders' Day Award Dinner, held by the ASU Alumni Association, where she was presented with the Alumni Achievement Award.

Top photo: Missy Farr-Kaye, the head coach of the Sun Devil women's golf team and the Pac-12 coach of the year, gave a motivational speech titled "Glory and Grit" to students and peer coaches in the First-Year Success Center on Wednesday. Photo by Charlie Leight/ASU Now